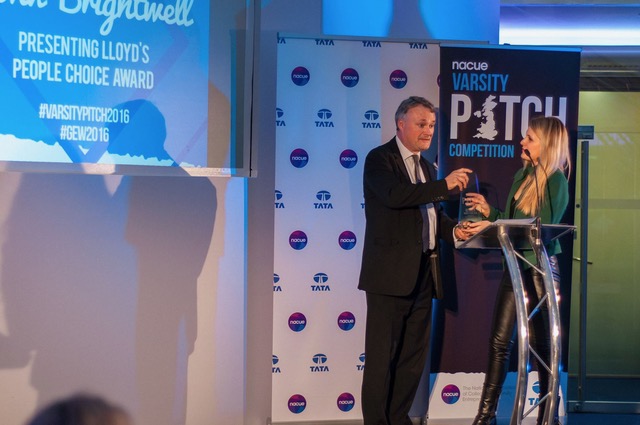 As Local Spoon describes itself, it is the Snapchat for last-minute local food deals. Founded by Diana Florescu, it won the Lloyd's Online People’s Vote award at Varsity Pitch 2016. She describes NACUE’s Varsity Pitch as ‘welcoming and an inspiring environment’. She also added that all the partners involved did their best to facilitate the participant's’ relationship with experts and external guests who attended the pitching event.

She particularly enjoyed the Mentoring Bootcamp. “Modelled after speed dating, this speed mentoring bootcamp gave our team a good dose of quick-hit advice just before the final pitch day.” She adds, “When we didn’t understand something or wanted to learn more, it was only natural to ask for help. And we did! We listened and streamlined the feedback that was given to us during the day.”

Diana’s team had a very ‘online’ and ‘social’ strategy to help them win the popular vote. She says, “We had a step-by-step strategic plan to communicate the company’s vision and to encourage the public to vote for Local Spoon, from engaging on multiple social media groups targeted at students and young professionals to collaborating with the University of Westminster and the Student Union through a short video.”

The last six months have been very exciting, full of ups and downs for Local Spoon. She said, “Since the Varsity Pitch, the team slightly pivoted on the idea and re-designed Local Spoon to deliberately bring feet to our vendors and to encourage millennials to dine out rather than ordering takeaway. Local Spoon’s innovation is to merge the online last-minute services with casual dining.”

They have secured 10 independent restaurants, for the past 3 months they have been working with student brand ambassadors at the University of Westminster and are in the process of recruiting more ambassadors.

Currently, Local Spoon is also pending final confirmation from the Sirius Programme, a great accelerator in the UK helping international students and graduates to scale their startup in the UK.

So how has Lloyds Banking Group helped Local Spoon? Diana said, “Winning the Lloyd’s Online People’s Vote award came as another validation of our business idea. They plan to feature the project on their website and to help the team with setting up a business account in the near future.”

Diana’s advice to aspiring entrepreneurs is, “Take on board the key learnings that directly apply to your startup given the stage that you are at that moment. Don’t decide to pivot in the middle of the competition just because a certain strategic vision sounds more appealing than what you’re currently building.....But most importantly, Don’t forget to have some fun!”